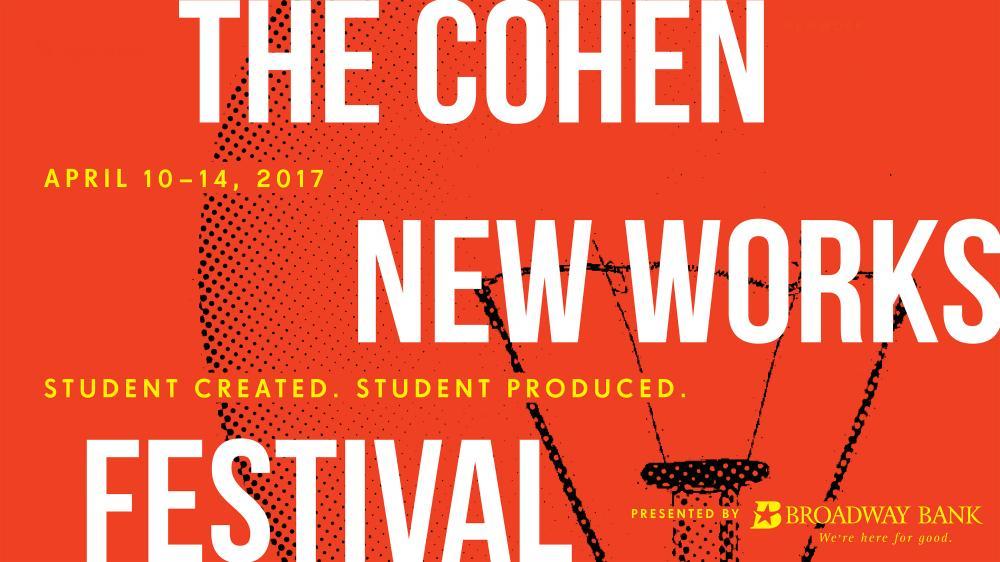 105 is a post-apocalyptic trilogy that follows siblings Jackson and Sybil across the country, into new societies and onto the battlefield. Spanning radio play, immersive theatre and dance, 105 offers an interactive theatrical experience exploring sacrifice and survival and ultimately asks who we become when faced with a broken world.

A Nervous Breakdown examines healing in the context of serious illness. Framed as a ritual around the Hebrew concept of Tikkun Olam, or "world repair," A Nervous Breakdown blends documentary theatre with dance, exploring the human aspects of the physician-patient relationship in modern medical practice and Americans' relationship with mortality.

Follow Amena, a young Syrian refugee, as she pursues her dreams in an unwelcoming world. Empowered by a love for astronomy and a strong sense of self, Amena refuses limitations. A story of strength and discovery, A Singularity also acts as an intergalactic exploration of home, place and space.

A-peeling acts as a journey that explores snapshots of what we think of as our most authentic selves as we maneuver through roles, labels, brands and stereotypes that are often piled onto us. Through dance theatre we capture the tensions between agency and socially constructed expectation.

antonia is a Chicana hip-hop adaptation of the Greek tragedy Antigone. This piece will incorporate four elements of hip-hop: DJing, MCs, break-dancing and graffiti art to tell the story of Antigone through the lens of a modern Chicana woman.

At the Boundaries: an exploration of queer relationships and violence

Two queer women navigate their limits, finding the boundaries of healing and hurting. Will creating their own world protect them from outside threats? Following the performance, opportunities for a variety of creative responses around themes in the show with a team of facilitators.

When high school pressures are eclipsed by the harsh reality of living with their negligent, drunken mother, teen sisters Brooklyn and Lucy decide to take matters into their own hands. The question isn't "can they do it," but "can they live with the guilt?"

Bloodthirsty Fiends is a new vision of Beowulf, produced with puppets and original musical by string quartet, Invoke. Join us in the "mead hall" to hear this gruesome tale of revenge, glory and puppy monsters.

Bored with Strangers guides audiences across campus through an interactive performance encounter with dance, performance art and music, inspired by the art of Nina Katchadourian that invites us to look more closely at the world around us. The tour includes free admission to the Blanton Museum of Art where audiences can visit the Nina Katchadourian exhibition, Curiouser.

When a hungry wolf eats a boy's flock of sheep, the boy leaves home to seek justice, only to be pulled into a contest that will choose the new animal king. Cry Wolf is a children's opera that uses Aesop's Fables to show how storytelling affects out communities and leaders.

An examination of neurodiversity through the lives of Arthur Miller's son, Daniel, who was born with Down Syndrome and subsequently institutionalized; and Tennessee Williams' sister, Rose, who was diagnosed as schizophrenic and later lobotomized. When society stigmatizes an individual, how should their family respond?

Follow the emotional and physical journeys of two young women through a gang-run Austin, Texas during the fallout of the apocalypse. How do the current social behaviors translate to a world without rules? How do women maintain their own identities when their bodies no longer belong to them?

When tragedy strikes, Blanca and her brother, Carlos, must flee their Guatemala home and make the journey to El Norte to reunite with their long-absent mother. Blanca and Carlos brave their dangerous, uncertain journey using their own inner strength and the goodness in others.

Forces in Contrast desires to lead us on a journey from dark to light. This interview and installation experiment aspires to spark a dialogue about issues of violence against women while reclaiming Waller Creek as a space for art and rejuvenation.

In a world ravaged by the products we consume every day, Garbage of Eden imagines what it might look like if we continue to turn a blind eye to pollution. Follow Sophie and enter the garden to discover that our home is no longer sustainable without action.

Golden is a cutting-edge chamber opera that combines acoustic and electronic sounds, powerful voices and evocative, immersive elements to tell the true story of a family whose belief in a magical golden object is tragically destroyed by the forces of technology.

Through the use of a participatory video installation, Hobo Salon invites a dialogue about the accelerated growth of Austin's homeless population. The salon explores the complexities of class relations while moving often hidden narratives into the public sphere, creating a place for personal reflection, community discourse and haircuts.

Hollow is a performance installation that examines death, afterlife and catharsis. Personal collisions of traumatic loss during youth are unpackaged, distilled and abstracted to present an integrative palette of movement, music and media. Hollow invites viewers to make their own reflections within the work's recurring loops.

Intro to Being Here

Enter an alternate digital reality and make choices to bring a being from that world into ours. Then attend a class to meet this being in person and help it learn its place in our realm. Intro to Being Here is a transmedia experience, integrating a video game with immersive performance.

It's Travesty! One Night with Jazzie Mercado!

It's a Travesty! is a glitter-bombed elegy for the distances working to separate us from ourselves. Using song and spell, the show confesses and confounds our personal histories, bodies and loves, not so we may leave those things behind, but so we may carry them with us and so we may call this healing.

How far does the apple fall from the tree? In the age of fourth-wave feminism and Hillary Clinton, how do the women of today align with the women that came before them? Matrilineal explores lineage and the role it plays in the dissemination of knowledge through mother-daughter relationships.

In the age of handheld computers and widespread social networking, the best is always at our fingertips. In seconds, we can find the highest rated viral video on the planet, or the hit song that everyone is humming. Forego the best, and visit your local Open Mic Night!

Rage to Heal is a devised piece moving through black rage toward black healing, collectively created by a community of singers, dancers, writers, actors and visionaries.

Scary/Freaky/Gross/Cold/Wtich/Girl: Don't Be Scared, Be Scary

A dance film/ongoing installation that delves into the female consciousness, exaggerating the methods women use to avoid objectification and protect themselves from coercion by members of the male population. Through comedic absurdity, dance and spoken word, this film is an expression of female reality.

Wading through a field of hanging eggs forces the participant to experience space and displacement amidst the quiet chaos of shells waiting to be broken. The viewer is placed as an outsider amongst the rhythmic pattern of the eggs, which welcomes dialogue about the spaces we inhabit and affect.

Si Se Puede (Yes We Can)

Si Se Puede is inspired by the life of Mexican-American farmworkers in the United States during the late 1960s/early 1970s. The piece will feature movement and discussions based on the lives of first and second generation Mexican Americans of the past, present and future.

Swadesh explores intercultural performance and "cross-culturalism." Cross-culturalism occurs when individuals from one cultural background learn from another culture and Swadesh created a space for audiences to experience it. The piece speaks to themes of tradition, negotiation of identity, tragedy and one's own "roots."

The Art of Collaboration

The Art of Collaboration is an interactive creation installation that relies on everyone working together through technology. It explores how, through the creation of sound, light and image, people can experience how what they achieve is only part of a greater whole.

Meet Randolph: a gigantic, dazzling, dancing, roaming rooster puppet. He's the biggest cock in the Cocks Not Glocks protest. Join Randolph and his hilarious farmer friend as they parade outside the Winship Drama Building in search of fellow protesters.

The Gospel According to Jocelyn

The Gospel According to Jocelyn is a concept that visualizes the creator's personal experiences as a black woman in America. It incorporates original music, film and poetry to detail the journey to self-identify, self-love and royalty. This album seeks to inspire more platforms for uninterrupted black female representation.

"What will happen when my grandchildren find my Twitter?" Ponder this question and many more as we dance together at Austin's most introspective concert. Using Dan Deacon's America albumb, TITLE LOADING combines multi-media spectacle with an interactive concert to explore what it means to be "authentic" in the digital age.

A sketch comedy and improv collective showcase focusing on what it means to be "uncastable" both as an actor and as a person navigating everyday life. Seek to explore issues of body image and feeling like the "other" through the lens of comedy.

Voices of Death Row is a performance focusing on poems by death row inmates in Texas. Through music, movement and drama, five operatic art songs will be presented alongside visual projections, including images of inmate art. A collaboration between prisoners and university students, this project humanizes those who are dehumanized.

Set in a gynecologist's office, Well Woman follows a person's experiences with breast cancer, masculinity, feminine strength and family. Torn between her family lineage of big hair and bigger boobs while expressing her own identity, Well Woman questions what we inherit from the women in our families.

A story revolving around Terrance and Judy, a black man and a white woman who are struck on a roof in a flooded neighborhood of New Orleans immediately after Katrina. In a town filled with ghosts of past injustices, they must find a way to escape the roof and find releif.

Vocation, career, occupation, livelihood, work. Work explores the humanity behind the labor that keeps the university operating. Through a devised experience, the audience explores the stories of maintenance and custodial employees working at The University of Texas at Austin. Inspired by audio-recorded interviews, Work offers untold insight into an integral piece of the community.

Zoom and Focus the Musical

Ruby and Dakota are struggling to maintain a long-distance relationship while pursuing their individual futures. Through biographical accounts, the cast takes the audience through a year in their lives. This manifestation of self-discovery incorporates music and dance to convey the constant push and pull we battle in every relationship.